Hit enter to search or ESC to close
Washington D.C.

By Scholastica Travel March 3, 2014 No Comments

The Rex Room
Description: “Thanks to a 50-year loan from the U.S. Army Corps of Engineers, a spectacular real T. rex specimen will arrive at the Museum on April 15, 2014. This T. rex will be one of the stars of our new National Fossil Hall which opens in 2019. Before it can go in the new exhibit, the Nation’s T. rex needs special care over the next five years. Come visit the Rex Room to see us studying, conserving, photographing, and 3D scanning its bones – and dozens of other fossils being prepared for the new exhibition. Visitors can look inside to see what our team is working on today!”
On view until: April 15, 2014-October 20, 2014
Location: First Floor Special Exhibits Gallery (Off the Rotunda in Mammals Hall)

Beyond Bollywood: Indian Americans Shape the Nation
Description: “This significant exhibition explores the heritage, daily experience, and diverse contributions that Indian immigrants and Indian Americans have made to shaping the United States.”
On view until: August 16, 2014.
Location: 2nd floor of NMNH, right off the elevator by the Constitution Avenue entrance.
View the Digital Exhibit 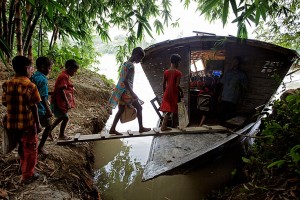 Description: “Images by Magnum Photos photographers examine the plight of environmental refugees, especially those displaced within the last decade due to natural disasters and global climate change.”
On view until: August 13, 2014
Location: Second Floor of NMNH, Special Exhibits Gallery
Genome: Unlocking Life’s Code
Description: “This exhibit that looks at the basic instructions inside all living things on Earth. Discover how your genomes are key to everything from curing cancer to tracing the migrations of our ancient ancestors.”
On view until: September 1, 2014
Location: Second Floor, Special Exhibits Gallery

American Heroes
Description: “The Congressional Gold Medal is the highest civilian award in the United States and has been awarded to distinguished Americans, such as, President George Washington, surviving veterans of the Civil War, Native American code talkers, the Tuskegee Airmen, Rosa Parks, the Apollo 11 astronauts and Simon Wiesenthal.”
On view until: June 2, 2014
Location:  Third floor east

Camilla’s Purse
Description: “The story of America includes the history of those who have lived through extraordinary circumstances. Camilla Gottlieb was a Holocaust survivor.  Her purse, discovered by her family after her death, contained letters and papers that trace her trials and triumphs.  These documents reveal a compelling story of imprisonment, the pain of separation, and, through emigration, a joyful reunion with family in America.”
On view until: May 4, 2014
Location:Second floor east 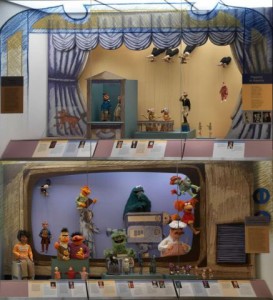 Puppetry in America
Description: “Puppetry is one of the oldest types of performance art in America. The earliest traditions were imitations of old world forms brought to this country by immigrants from Italy, France, and Great Britain.  American puppetry is unique. Its many styles and techniques combine ancient and immigrant traditions, homegrown innovations, and the influences of electronic media. The art of puppetry relies on the harmonious relationship of a puppet, a puppeter’s imaginative manipulation, and an audience whose willing suspension of disbelief allows it to accept the puppet’s actions as “real.” Please note: This special display will feature two different sets of objects from the stage and screen that cover over 160 years of American puppetry.”
On view until: April 13, 2014
Location: First floor center
Making a Modern Museum: Celebrating the Fiftieth Anniversary of the National Museum of American History
Description: “This exhibition will document the origins of the National Museum of American History (originally the Museum of History and Technology from 1964-80) and consider what those beginnings mean for the museum today and into the future. The 50-year anniversary display will focus on the museum, circa 1964, as it was originally conceived, designed and built. It will also take a look through the past five decades to see how the museum evolved and transformed into what it is today.”
On view until: Opens May 16, 2014
Location: Second floor east
The Early Sixties: American Culture
Description: “This display celebrates the early ’60s as the background for the opening of the museum. That period of American culture straddled a time of dominant traditions and social norms with developing broad-based countercultural and reactionary expressions in response to demands for individual and community freedoms in areas of arts economics, politics and environmental and civil rights issues.”
On view until: Opens April 25, 2014
Location: First floor center
The Early Sixties: American Science
Description: “When this Museum opened fifty years ago, the goal of improving science and technology engaged many Americans. Fear of nuclear attack by the Soviet Union, fascination with outer space, and the hope of training a new generation of scientists encouraged Smithsonian historians to stress the importance of science in world culture. Throughout its history, this Museum has collected objects associated with science. To honor our fiftieth anniversary, we showcase a few innovations of the early 1960s. These new ideas made it possible to study hidden aspects of the physical world. Moreover, the discoveries increased national prosperity, transformed business practice, prolonged lives, and affected intimate relations of couples.”
On view until: Opens April 25, 2014

Spirit & Opportunity: 10 Years Roving Across Mars
Description: “This exhibition celebrates the amazing images and achievements of the two Mars Exploration Rovers on the 10th anniversary of their landings on the Red Planet.”
On view until: September 14, 2014
Location: Second floor at museum on National Mall 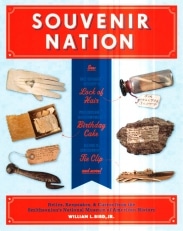 Souvenir Nation: Relics, Keepsakes, and Curios
Description: “What is a souvenir? What becomes a souvenir? Find out in this exhibition!”
On view until: August 17, 2014
Location: Smithsonian Castle

LEGO Model of the Smithsonian Castle
Description:This Smithsonian Castle model, constructed of more than 45,000 LEGO® bricks, was built to celebrate the origins of the Smithsonian’s National Zoological Park. It is displayed in the Children’s Room in the spirit of the room’s early use as a museum designed to inspire wonder in children. While the Castle model is built to scale, the Mall landscape and the animals situated on it are imaginatively depicted.
On view until: August 5, 2014
Location:  Children’s Room, South Entrance

American Cool
Description:”What do we mean when we say someone is “cool”? Find out in this exhibition.”
On view until: September 7, 2014
Location: 2nd Floor North

Mr. Lincoln’s Washington: A Civil War Portfolio
Description: “Photographs, prints, drawings, and maps reveal how the Civil War affected life in the District of Columbia”
On view until: January 25, 2015
Yousuf Karsh: American Portraits, Part I
Description: “Photographic portraits by Yousuf Karsh (1908–2002) include those of Georgia O’Keeffe, Jonas Salk, Marian Anderson, Grace Kelly, Elizabeth Arden, I. M. Pei,  Isamu Noguchi, and Eleanor Roosevelt.”
On view until: April 27, 2014
One Life: Martin Luther King Jr.
Description: “Trace the trajectory of Martin Luther King Jr.’s career, from his rise to prominence as the leader of the national civil rights movement to his work as an anti-war activist and advocate for those living in poverty.”
On view until: June 1, 2014
Location:  1st Floor, East

Modern American Realism: The Sara Roby Foundation Collection
Description: “Explore the range of realist art in the 20th century in this exhibition of some 70 paintings, sculptures, and works on paper.”
On view until: August 17, 2014
Location:1st Floor, West Wing 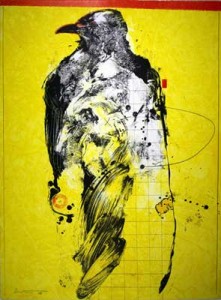 Gravity’s Edge
Description: “Exhibition of works by Morris Louis, Helen Frankenthaler, Anne Truitt, and others trace the exploration of the force of gravity and new perceptions of the edge in the process and understanding of postwar art.”
On view until: June 15, 2014
Location: Lower level
Directions: Jeremy Deller – English Magic
Description:“Video installation by Turner Prize-winning British artist Jeremy Deller is an idiosyncratic collective portrait of Britishness asking how consumerism, technology, and the new monotony of work have altered the experience of nature, culture, and history.”
On view until: August 31, 2014
Location: Lower level
Damage Control: Art and Destruction since 1950
Description: “This ground-breaking exhibition explores the theme of destruction in international contemporary visual culture.”
On view until: May 26, 2014
Location: Level 2

School Tours to Washington D.C. During a Government Shutdown

Get A Quote for the Washington DC Trip!

Get A Quote for Your Marching Band Trip!

Get A Quote for the Gettysburg and D.C. Trip!

Get A Quote for the Gettysburg and Philadelphia Trip!

Get A Quote for the New York Trip!

Get A Quote for the Orlando Trip!

Get A Quote for the Disney Marching Band Trip!

Get A Quote for the Chicago Trip!

Get A Quote for the Williamsburg Trip!